In the Fall of 2012, Livescribe introduced a radical departure to the way users access the notes on their Livescribe pens. Formerly, it was necessary to connect the Echo or Pulse pen to a PC or Mac using a USB cable. Once connected, new and updated notes could be downloaded to the computer using Livescribe Desktop. From the desktop, one could view notes, listen to recorded notes and export selected notes to a variety of host services as a pdf file. These services included the local file share, Evernote, Dropbox and a few other services. With the introduction of the Livescribe Sky WiFi pen, a user’s Evernote account became the sole home for all Livescribe notes.  “Why Evernote” seemed to be the most frequent question among new Sky customers.

For me, the question “Why Evernote” has three great answers: Platform, Platform, and Platform!

In the past, Livescribe notes were limited in that they could only be organized by the notebook they were written in. With Evernote, you have a variety of ways to organize your Livescribe notes.

You can tag them with topics so your notes are associated with other information. You can link to a Livescribe note from any other note inside of Evernote. Evernote content is organized in notebooks and you can copy any Livescribe note into any of your other Evernote notebooks. You can set reminders on your Livescribe notes, and Evernote will alert you when a reminder is due. 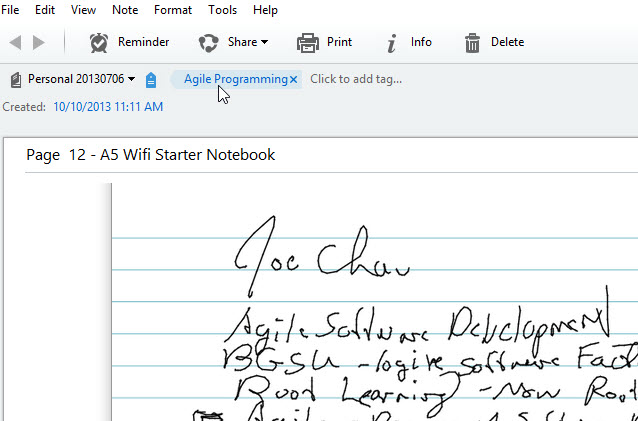 Organize your Livescribe notes with tags.

Of course, with better organization comes better retrieval. After all, what good is a note, if you can’t find it? To facilitate finding the desired information, Evernote has an exceptionally powerful search engine baked right in. You can search by tags or content text. Evernote can find notes with the desired search text as part of the note, in attached files, and in attached graphics – including your Livescribe notes! Of course, the accuracy of finding text in your Livescribe notes depends on your handwriting. Mine isn’t so hot, so I rely heavily on tagging. You can also search by date created or date updated. Can’t remember the date? You can search by relative time periods such as the last n weeks or the last n days.

In contrast to the way Livescribe Desktop stored notes on the local computer, Evernote makes your Livescribe notes available on any device. You can see the same notes on your tablet, your phone or your computer within moments of syncing the Livescribe pen. Evernote supports all the major platforms: Android, Windows, and Apple’s iOS. Evernote comes in several flavors: free, paid, and Business.  Evernote’s interface varies slightly from platform to platform, but core functionality is the same. That functionality is summed up nicely in the company’s tagline: “Remember Everything.”

Goodness knows the world doesn’t need another note taking application. Instead, Evernote offers the note as a container for just about any kind of information you want to put there: graphics, Office files, audio, website clippings, pdfs, Livescribe pages and a ton of stuff I haven’t even thought of. The Evernote API enables independent developers to create applications that people use to create and store all sorts of specialized content: address books, recipe files, travel plans, GTD systems, etc in Evernote’s robust note structure. As important as your Livescribe notes, they aren’t the only information needed for your projects. Evernote enables you to organize your Livescribe notes with all the goodies you’ll need to pass your CPA exams, or build your dream house, or get that new business off the ground.

Why Evernote? Because the stuff you’re working on is so awesome, you need all the help you can get!